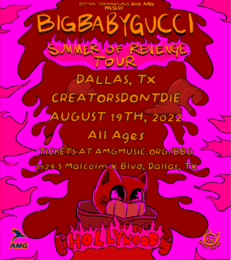 AMG & Better Temperatures Presents: BigBabyGucci’s Summer of Revenge Tour. BIGBABYGUCCI is an American rapper from Charlotte, North Carolina. He came to public attention in 2016 after receiving recognition for his debut project, A Fucking Mixtape.

Around 2017 BigBabyGucci released his project ‘Romance Isn't Dead’, gaining the attention of notable blogs like Lyrical Lemonade, Daily Chiefers and Elevator. After reaching over 4 million plays on Soundcloud. He began touring and eventually landed in Nashville, Tennessee. Where he began recording with his current engineer Joe Dirt, BBG then released a video to Tales From The Cornerstone (first song recorded in Nashville) exclusively with Elevator, reaching over 250,000 views on youtube.

Following the Sony release, BBG debuts “Universe 2” the sequel to the extremely successful “Universe” project. This project was the beginning of a sound and style change for BBG and the beginning of his first major push on mainstream (DSP’s.) This push allowed BBG to continue dropping singles with success until the release of his project “Send Help” featuring one his most successful songs, ‘Drop Top Lexus’ This project solidified his fan base. With the breakout success of the song “Can’t Feel Shit”, he has continued on his upward trajectory with the release of the projects titled “One Night I Took Acid”, “Iridesense”, & “Soda & Syrup” he currently resides in Los Angeles where he creates music independently with over 450,000 monthly listeners on Spotify.