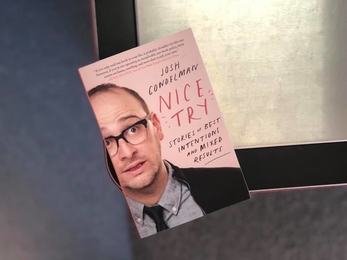 The Cardigan Connection and (401)j presents: Nice Try, A Night of Comedy with Josh Gondelman

Join The Cardigan Connection and (401)j for a night of laughs with Emmy Award-winning stand-up comedian and all around nice guy Josh Gondelman, as we celebrate his new book Nice Try: Stories of Best Intentions and Mixed Results. Tickets include a personalized copy of the book, the show, and a drink! This is going to be a night you won't forget, but don't take our word for it...

“Josh Gondelman is one of the most original hilarious voices out there today. This book will hook you and make you laugh and laugh.” -- Amy Schumer

“Josh Gondelman is hilarious. This book proves he clearly wouldn’t have survived if he wasn’t.” -- Judd Apatow

“If you only read one book in your life, it probably shouldn’t be this one. However, if you’re not operating an inexplicable one-book policy, these stories are funny, touching, and more than worth your time.” -- John Oliver

ABOUT THE BOOK: Josh Gondelman knows a thing or two about trying—and failing. The Emmy Award-winning stand-up comic—dubbed a “pathological sweetheart” by the New York Observer—is known throughout the industry as one of comedy’s true “nice guys.” Not surprisingly, he’s endured his share of last-place finishes. But he keeps on bouncing back.

In this collection of hilarious and poignant essays (including his acclaimed New York Times piece “What if I Bombed at My Own Wedding?”), Josh celebrates a life of good intentions—and mixed results. His true tales of romantic calamities, professional misfortunes, and eventual triumphs reinforce the notion: we get out of the world what we put into it. Whether he’s adopting a dog from a suspicious stranger, mitigating a disastrous road trip, or trying MDMA for the first (and only) time, Josh only wants the best for everyone—even as his attempts to do the right thing occasionally implode.

Full of the warm and relatable humor that’s made him a favorite on the comedy club circuit, Nice Try solidifies Josh Gondelman’s reputation as not just a good guy, but a skilled observer of the human condition.

TICKETS include a personalized copy of Nice Try, the show, and a drink ticket!

Ticket sales for this event are temporarily unavailable. To purchase tickets, please contact the organiser or check back here again later.